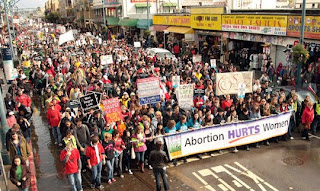 The West Coast Walk for Life in San Francisco last weekend was amazing! Imagine 40,000 people standing in the rain to listen to speakers championing life, and then walking 2.5 miles along the San Francisco waterfront -- parents with children in strollers, elderly men and women, Roman Catholic Christians, Evangelical Protestant Christians, Jews, Mormons -- everyone celebrating and praying for life.

The purpose is to stand up and say: human life is sacred and must be defended from conception to natural death.

Everyone was praying, singing, laughing or just quietly walking. The only frowns were from tiny knots of counter protesters, a strange mix of atheists, pro-choice advocates, and random advocates for who knows what (this was San Francisco after all).

The leaders of the procession held signs like this: "I regret my lost fatherhood", "I regret my abortion", "Women deserve better than abortion".

Some of my favorite signs read: "As a former fetus, I oppose abortion", "A person is a person, no matter how small. Dr. Seuss", "Jesus heals".

The speakers included: a woman who deeply regrets killing her baby, a former abortion clinic worker who had a conversion and now is a Pro-Life advocate, an Evangelical Protestant minister, a Pro-Life advocate from France, a Roman Catholic priest -- really inspiring.

What can you do? Please write your Congressional representative to keep abortion funding out of health care reform. I recommend this easy to use site by the US Conference of Catholic Bishops:

Also, keep an eye out for people collecting signatures for a change to the Constitution of the State of California to change the definition of a human being to include a fetus.

Index to Past Blogs

Debbie
Oakland Diocese, California, United States
This is a picture of the Sacred Heart of Jesus and the Immaculate Heart of Mary. I am a Roman Catholic parishioner at St. Michael Parish and have served as a catechist for RCIA, a Eucharistic Minister, Coordinator for the Faith Enrichment Team, and member of the Social Concerns Committee.